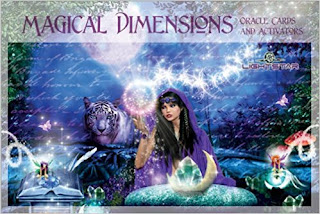 Description: 44 cards and a 72 page guidebook in a sturdy cardboard box, with magnetic closure and a built in cleansing symbol.

The Magical Dimensions Oracle Cards and Activators are indeed magical and quite different than anything I've experienced over the years of dabbling with various Oracle decks.

These cards can be used as Oracle Cards or as Activator Cards. The cards are categorized into main frequency types: Angelic, Elemental, Galactic, and seven Chakra Portals. 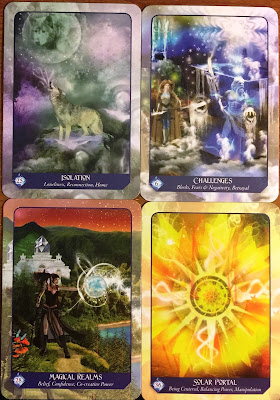 The guidebook covers an introduction, an overview of card categories, cleansing and care of your deck and a prelude to layouts. There are six suggested Oracle Card Spreads, suggestions for Activator uses, and three Activator Layout Suggestions. The rest of the guidebook is devoted to the Card Interpretations.

One page is devoted to each card, with a full color version of the image and card number. The card's title is given along with a few keywords, a connection to a particular sacred color ray, followed by a Celestial Interpretation and an Oracle Interpretation. The author also suggests working with companion crystals and essential oils to enhance the frequencies of the cards. Suggestions for the types of crystal and oils are provided for each card.

Let's take a look at the Challenges card above. It looks to be a very busy card to me, pure chaos. The woman is dressed for battle in her high boots and long fur coat. In her hands, she holds a powerful sword, a tool to sweep away all that chaos. But, she's not alone. A man wields a similar sword assisting her in the fight against the clutter.

"Celestial Interpretation: Challenges resonates to freedom from fears, negativity, and blockages. Residing in a denser dimension can cause the lower self to succumb to fear-based emotions. ...."

"The Oracle Interpretation: If you are feeling blocked, afraid, or stuck, assistance is on the way . . . so hold on and don't succumb to negative thinking. ...."

I recommend this deck for anyone looking for something different.

Note: this is an updated version of a previously published deck in 2015. I'm unaware of what has or has not been updated and/or revised in this deck. 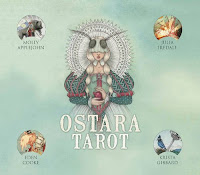 Description: 78 cards and a 112 page guidebook in a sturdy cardboard box, with magnetic closure.

“The Vernal equinox, Ostara, wakes the city after winter. Through 78 stunning Tarot cards and an accompanying guidebook, delve into the fantastical world of traditional symbolism and contemporary themes that will return you to the wilderness and explore the feminine.”

The Ostara Tarot is one of those love it or hate it decks, but with a twist. You may find you like one suit and hate the rest of the deck. You may like the whole deck except one suit. There's a reason for this breaking apart of interest within the deck.

Four talented women have formed a group and created a deck together. They each took a suit, and then split up the Major Arcana cards. This gives you varying styles throughout the deck. Below, I think you'll quickly see the startling effect of the styles. 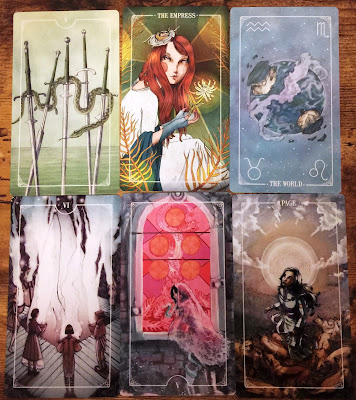 I also found some of the cards difficult to classify with its suit. Above, you see some are relatively obvious, like the Swords and Pentacles. Can you tell which suit the bottom two corners belong to? The left is Cups and the right is Pentacles. Of course, this issue can be overcome by simply becoming more acquainted with the deck.

I really do love these cards. The talent that went into this deck is extraordinary. Even the backs make you stop and stare. Yes, there are a few I don't particularly like, but I like the majority of the deck. And, I do favor two of the artists over the other two, but again that is a style issue.

The Guidebook has a brief preface and the rest of the book is devoted to the individual cards. There's a full color image on one side, and card information on the other page, including Card Title, Keywords and Card Details of both the upright and the reversal. At the bottom of the Major Arcanas, the illustrator's name is given. And at the end of the guidebook, there's a brief section on each artist and her assigned suit.

"In this deck, you will discover a journey that loosely follows traditional Tarot symbolism, while also exploring themes of wilderness, surrealism, and feminine intuition."

I'm not sure if I would recommend this deck to a new reader of tarot, but then I can't really say that one couldn't pick it up and go with it. The world of Tarot and Oracle cards seem to get more entangled as we move forward in our journeys. So, I can't see why one couldn't learn this deck from the ground up and gain an intuitive connection worth exploring.

Take the Seven of Swords, for example, which is pictured above. For an experienced reader, it is easy to see the Rider-Waite influence in this card. But even new eyes could decipher what this little rascal is up to.

The Six of Cups could get tricky. "Six cup-bearing figures stand around a surfacing whale." Now, I'm not saying it doesn't, it may, but what does that have to do with childhood, memories, or innocence?

With all that said, I'm in love with the deck and look forward to getting to know it and all its hidden bits.