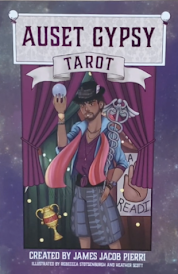 "The Fool card through the World card is the story of the Tarot as it has been relayed for generations, and it's the most popular explanation of the Major Arcana. But this is the Auset Gypsy Tarot Deck and it's a new story, a different telling, true to tradition but with its own unique adventure!"

The Auset Gypsy Tarot deck is unique in imagery, but does follow the traditional path of the tarot story. The Major Arcana cards are depicted in cartoon style images and include the astrological associations. The Minor Arcana cards are presented in pip style, while the court cards take on a playing card design. 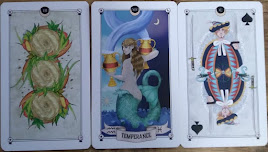 The guidebook begins with a forward and the story of the Auset Gypsy Tarot and then dives into the card meanings. The Major Arcana are given two pages each: the astrological association, traditional meaning, Auset Gypsy meaning, and story plot, and a full-page picture of the card. 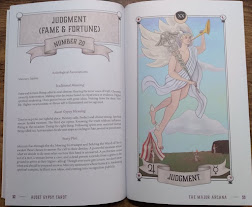 The Minor Arcana sections are smaller, two per page, and gives the astrological association and key words and phrases. You'll find some of these expand on the traditional meanings, while some seem very different than the normal suggested meanings. The court cards are also presented two per page. 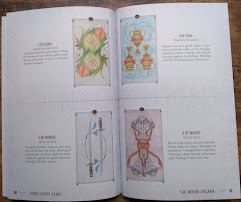 The guide closes with three suggested tarot spreads and a bit of tarot advice, a two-page section for notes, and a short about the author.

The card stock of this deck is very thick and stiff. I found them hard to shuffle. Although this is a beautiful deck, I didn't find any connection with the cards. Each reader will find certain decks attract them more than others, this just isn't a deck for me.

I do recommend this deck to readers who want to step a little outside of the tradition and explore a new story. I wouldn't suggest this as a beginner deck. The Minor Arcana, presented in pip style, doesn't allow for a visual interpretation or any guide to the meanings. With that said, a little challenge isn't bad, just be prepared to see the different aspects outside of the traditional book meanings of the Rider-Waite decks.